Our first holiday on Boa Vista, Cape Verde, was in the winter of 2014. We, Henriette, Bobby and I (Arjen) love beach, sea, sun and kite surfing and Boa Vista was well recommended. Before that we always went to the Caribbean, but there it is so hot and you can’t stand it without air conditioning. On Boa Vista the temperature varies, all year round, between 22 and 28 degrees. Then you can still do something. We are not the type of persons for all inclusive hotels. We like to sit between the locals, eat what we want and when we want and especially not too crowded. So we rented a flat on Praia Estoril near the beach. And what kind of beach. A few kilometres of pearly white sand and a beautiful azure blue sea. Not crowded like in Costa Blanca but here and there a few walkers. We didn’t know what we saw. 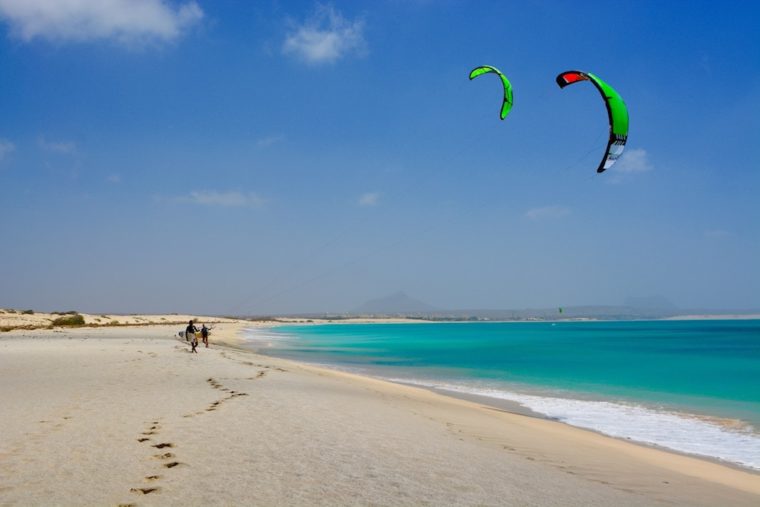 Two kitesurfers at the beach of Boa Vista

Buying a flat or not?

The following year, of course, we went again and saw a flat for sale. We thought we would have a look anyway. When the owner mentioned the price we couldn’t believe it at first. Did we understood it well. €150,000 for a spacious flat by the sea. In the Netherlands you pay four times that. And so the plan arose to sell our house in the Netherlands and use the surplus value to build our dream house on Boa Vista. But first, let’s see how that works. Would it be all right? Have you lost your money if you transfer it. That kind of questions. We had already read that Cape Verde has its administrative affairs in order, but you want to know for sure.

Is there a land register? Yes, there is.

Are there notaries? Yep, one in Sal Rei, but a very serious one.

How do you buy a house? Almost the same as in the Netherlands. You sign a sales contract with the estate agent, pay 10% and the rest on the agreed date, possibly via the notary if you wish. The transfer also takes place at the notary.

From ruin to dream house

In 2016 we received a phone call from Bobby who now lives on Boa Vista. “There is a house for sale on the most beautiful spot of Sal Rei on the beach! It just needs to be rebuilt a bit”. That bit turned out to be a bit more. The house was a ruin but the view from the roof terrace was breathtaking. We didn’t have to think for very long. “The sale was completed pretty quickly and we drew up our own house. There were four flats in it. One for ourself and three for renting out to people who wanted a nice holiday flat by the sea. We already knew the contractor. “It will be finished by Christmas,” he said in August. I thought, that’s fast. It was indeed finished at Christmas. A year later. In Cape Verde, people deal with time in a different way than in the Netherlands. It wasn’t a very relaxed period, I can tell you. We did learn a lot and I can recommend everyone to come and live on Boa Vista. Our dream house is called Tud Dret. That means “All good”. On the facebook page of Tud Dret you can see more pictures. Curious about the possibilities to buy a house on Boa Vista? You can always contact us.