Boa Vista, the island with a thousand sand dunes that shine in the sunlight. Also known as the island with endless white sandy beaches, an azure blue ocean and hidden places only visited by Loggerhead turtles and protected bird species. Relax completely in a cozy beach club, experience the island life at its purest and enjoy boa vista’s (literally: beautiful views) friendly climate.

A long time ago, Boa Vista was a mountainous volcanic island. Years of erosion have flattened the mountains and today the island is dry and desert-like. Of all the Cape Verde islands, Boa Vista is closest to the African coast. The sandy interior owes the island to the wind. The sand that blows over from the Sahara desert ends up here for the most part. The interior is rough, with sandy plains and vast lunar landscapes. Because water is scarce there, little vegetation grows except some palm trees. The coastline around Boa Vista stretches for almost 150 km. Most beaches are protected nature reserves and (for the time being) undeveloped. 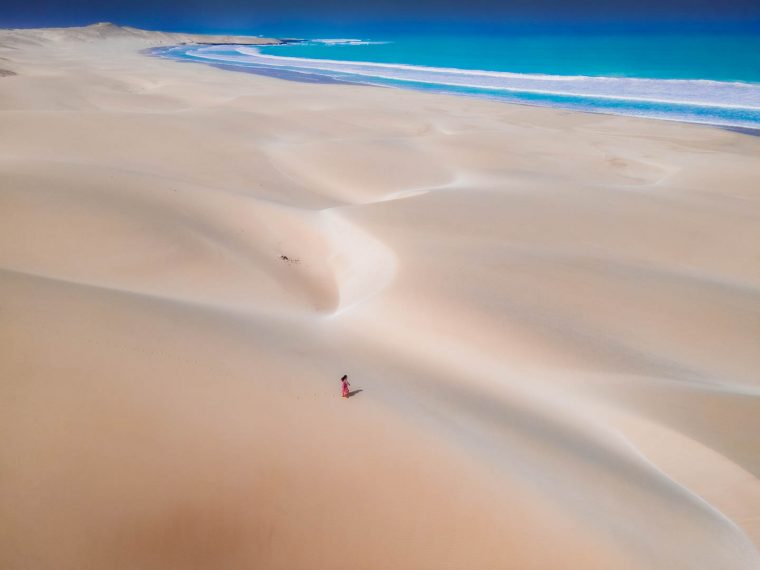 Boa Vista has a pleasant temperature all year round, yet Boa Vista also has “winter” and “summer” months. The winter months, from November till May, are the months with a temperature around 25 degrees due to the trade wind that blows over the island. These are the ideal months for (kite)surfers but also for anyone who wants to escape the cold winter in Europe. The other months the wind subsides and the temperature rises a number of degrees. It rains about 8 hours a year on the island mainly in August and September. In short, Boa Vista is a perfect sun holiday destination all year round.

Sal Rei is the capital of Boa Vista and also the only city with tourist facilities. The city is located in the northwest of the island in a large bay. It is a cozy city that exudes local charm and has everything for a sunny beach holiday; a vast sandy beach with cozy beach clubs, surf schools, local shops, souvenir shops and good restaurants with live music several times a week.

You can have lunch at one of the beach clubs and in the evening you can go to cozy, international/national restaurants in the city centre. Prices are higher than on the other islands, partly due to the import of food products and a shortage of spring water. You can still eat and drink cheaper on Boa Vista than in the Netherlands and Belgium.

The bay of Sal Rei is a suitable place to practice water sports. The vast bay has good spots for kitesurfing, windsurfing and golf surfing. 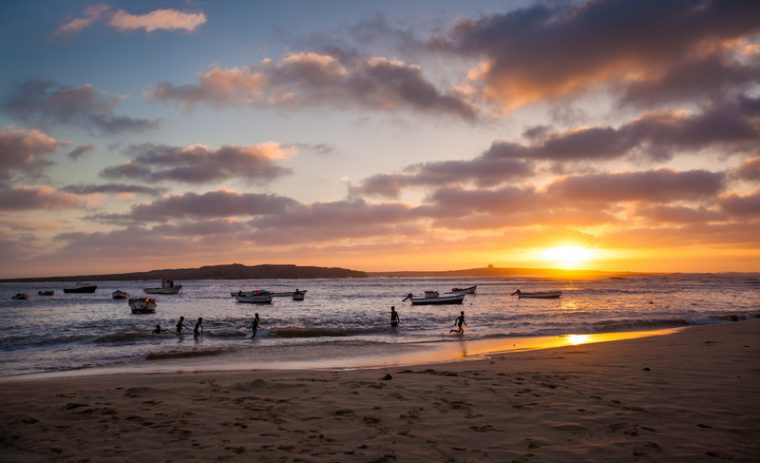 Playing kids at the bay of Sal Rei

The most beautiful white beaches of Cape Verde can be found on Boa Vista. Many beaches are not yet known and free of tourism. This is because the roads to them are unpaved and can only be reached with a 4×4 vehicle. 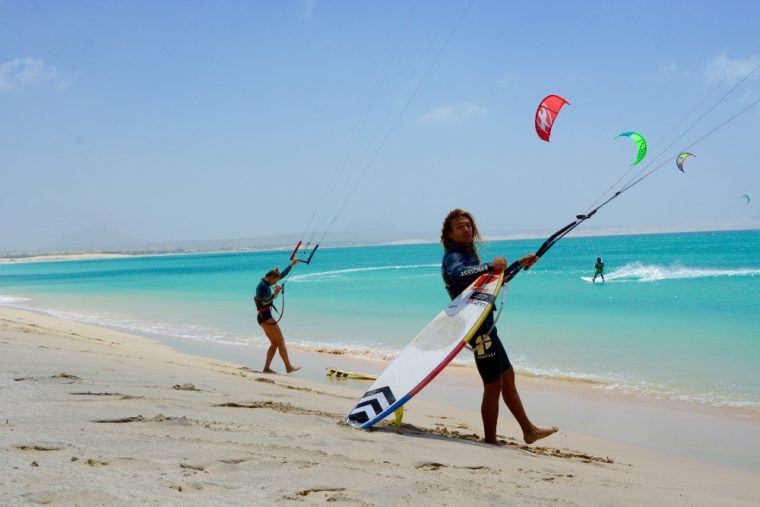 Kitesurfers on the beach of Boa Vista

Boa Vista is an important breeding area for the Caretta Caretta turtles. The turtle season starts in July and runs until the end of October. In this period you have a great chance to see turtles laying eggs in a nest on the beach. With a guide you will walk on the beach to experience the process up close. In the nesting areas, baby turtles are released early in the day to start the journey to the sea.

Cape Verde is on the migration route of humpback whales. During the mating season they stay in the waters around Boa Vista with their newborn young. From March until the end of May you can spot whales when you join a whale watching tour.

Transport to and on Boa Vista

The taxi ride from the airport to Sal Rei takes 10 minutes and amounts to 10 euros (in 2020). At BOBBYWASHERE airport pick up is included. In the centre of Sal Rei you can travel around the city for a few euros. If you want to see more of the island, we recommend taking a quad for a few days or go on an island tour with a local guide.